Originally built in 1928, converted into war shelter in the early 90s, and now a winery, it’s the classic tale of a son of a Frenchwoman and an Istrian father growing native Croatian grapes in an old Mussolini era concrete water tank. 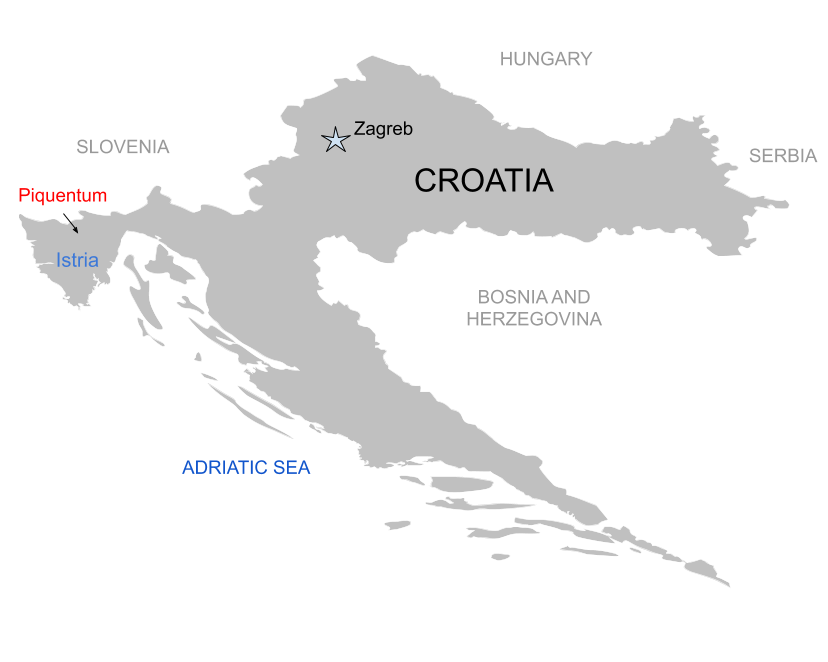 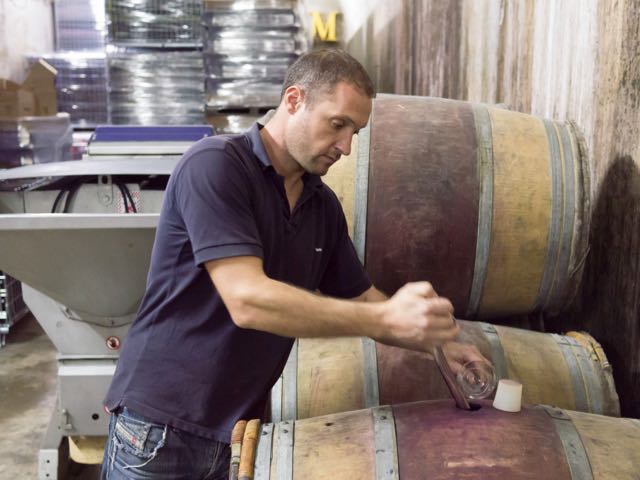 Born in Jurançon in the foothills of the Pyrenees, Dimitri Brečević studied oenology in France and then worked at Domaine de Chevalier in addition to working harvests in Australia, New Zealand, Bordeaux, and Burgundy. In 2004 he decided to invest himself in his father’s homeland of Istria near the town of Buzet. 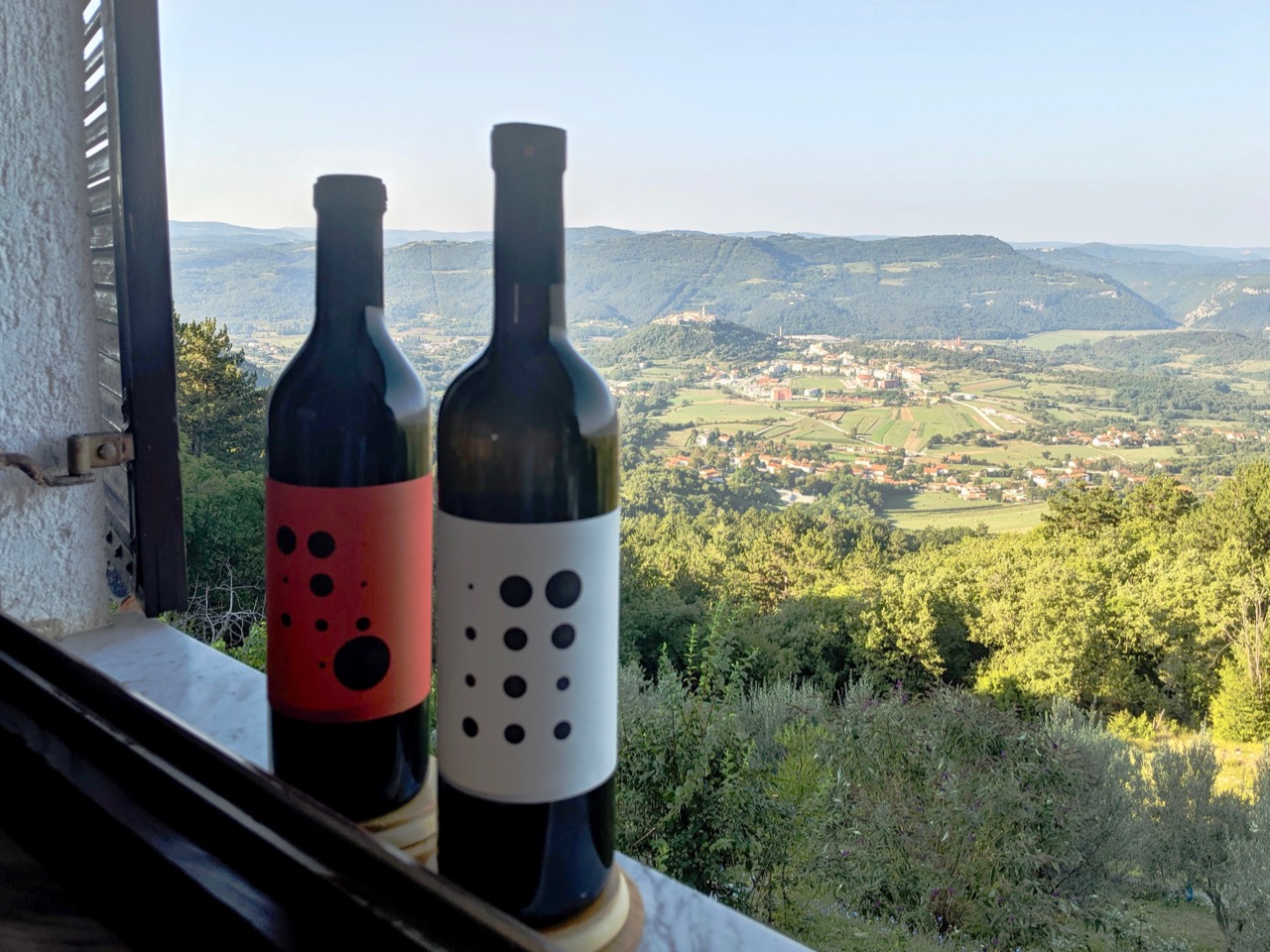 Facing the village of Buzet

The name “Piquentum” is the ancient Roman word for the beautiful hilltop town of Buzet. Dimitri’s arrival falls right in line with the regions long history of Romans, Goths, Franks, and Bavarians. The Republic of Venice even had a solid 500+ year run. And although briefly a part of the Austro-Hungarian Empire until the end of World War One, it was once again a Province of Italy until 1947 when Yugoslavia was created and Italy ceded the territory.

Istria is the largest peninsula in the Adriatic. Croatia’s westernmost region, it borders both Italy and Slovenia. With only about 1750 square miles, over 280 miles are coastline with 35% covered with oak and pine forests. Indigenous grapes like Malvazija Istarska and Teran coupled with the mineral rich white and red Karst soils all seem to echo the salinity of this pristine coastline and the pungency of its truffle-ridden interior. 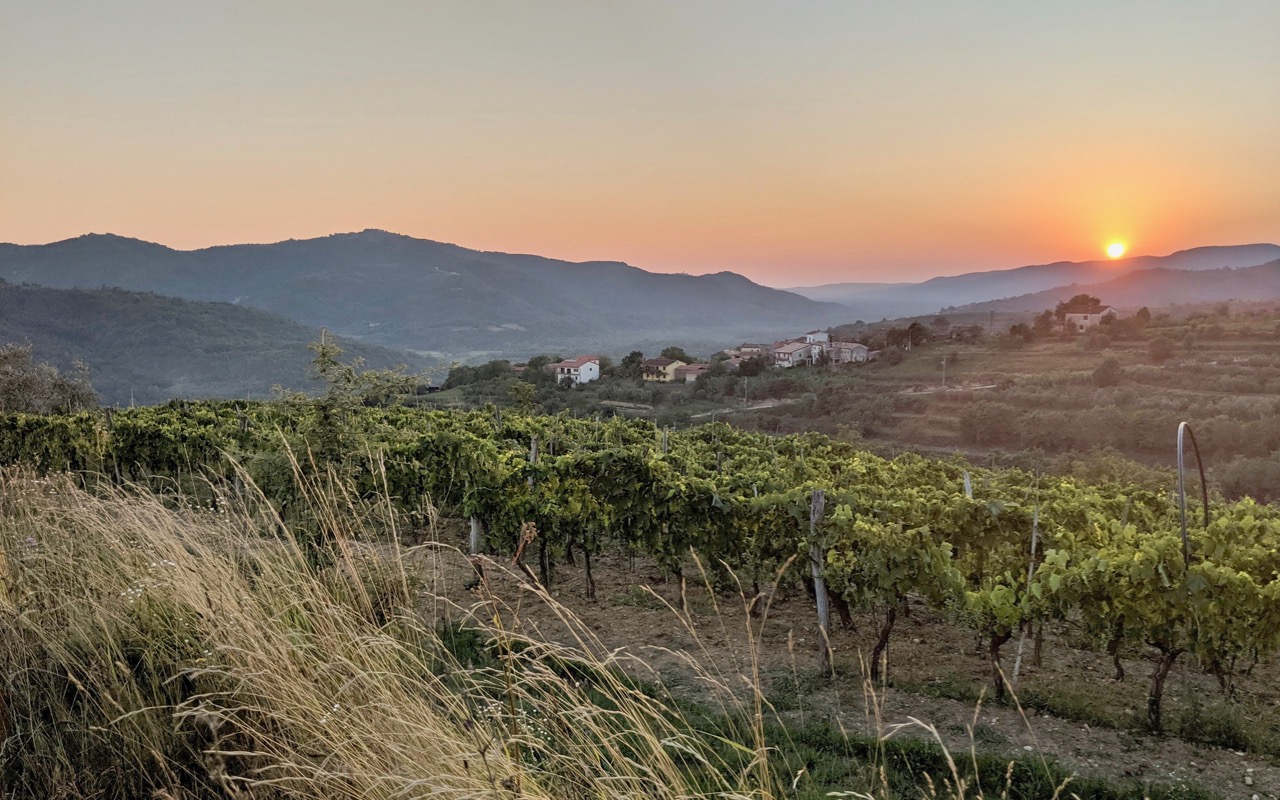 Sunset In the vineyard

On the northern edge of Adriatic, the climate in the interior of Istria can actually be very cold when strong winds known as the “Bura” descend from the north. Even closer to harvest in September, the nights remain cold and help maintain acidity and aroma despite experiencing dry and hot days typical of the Mediterranean. With currently 4.5 ha of vineyards: Malvasia 60%, Teran 20%, Refosco 20%, Dimitri’s goal is to keep competition high, work the land by hand, and get roots digging deeper and deeper into the ferrous rich red and flysch rich white soils that define Istrian Terroir. 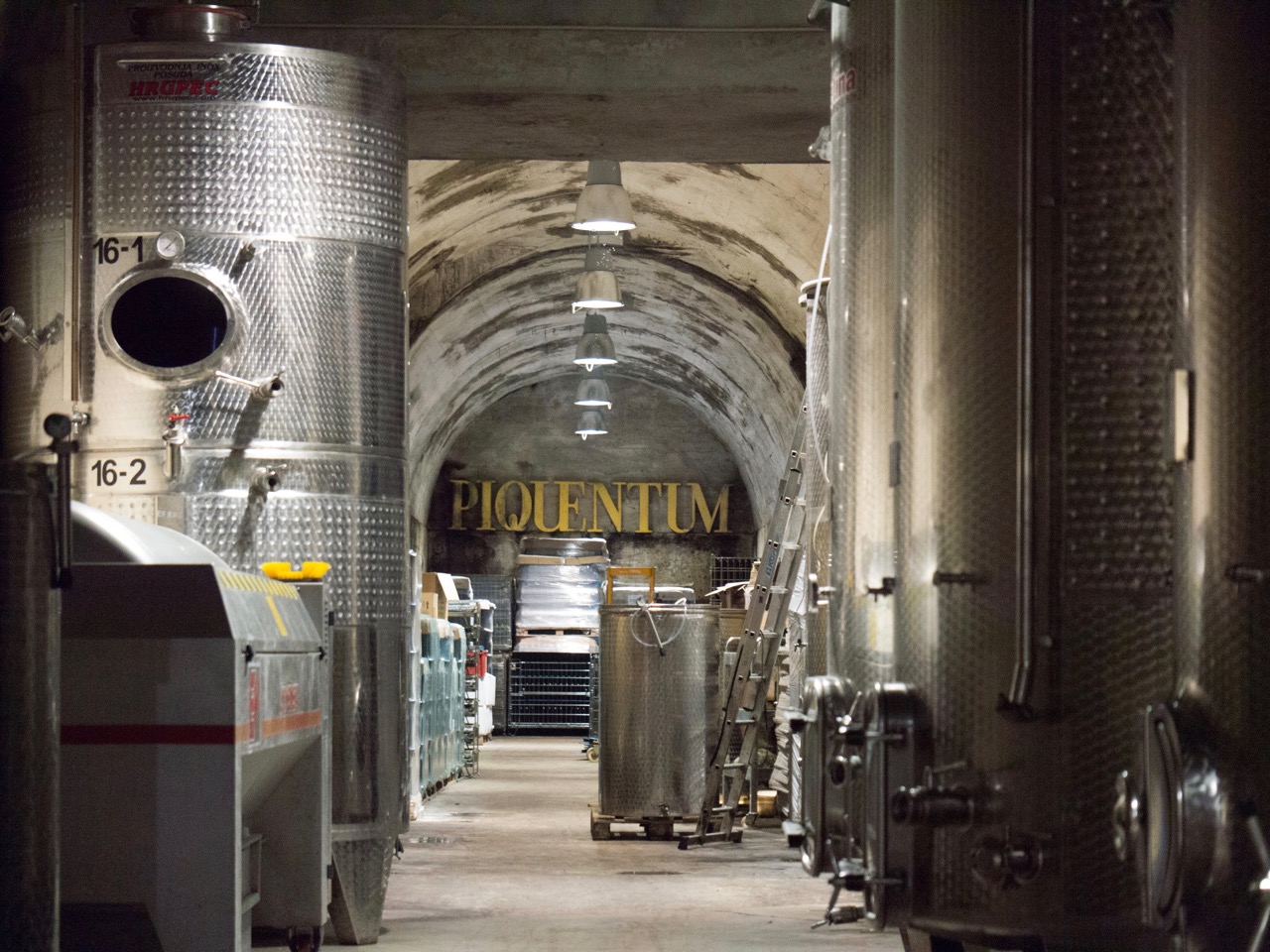 Grapes are hand picked and then slowly pressed into tank without temperature control. Since the winery is converted concrete water tank, the temperature is a constant 10-11ºC all year long. This is perfect for aging, but this is often too cold to get a native fermentation started. Using fans to draw in the warmer outside air to around 14ºC, all of Dimitri’s wines complete a wild ferment without the use of added yeast, bacteria, enzymes, or any additives. After a long and slow fermentation without stalling fermentation or cold soaks, the wines are bottled unfiltered with just enough sulfur to ensure a safe journey across the Atlantic.

In contrast to the iron rich red soil of Štoka, this Malvazija is planted in predominately the white flysch rich white soil of Istria. It was then fermented in 70% barrel and 30% stainless steel after 3-4 days on the skins in open vats. The skin contact magnifies the salt without losing the aromatics and acidity. The color is a bright gold, not a faded oxidative one. In further contrast to Malvazijas grown near the coast, this is the rugged truffle ridden and forested interior. There’s a meaty earthiness that stands up to the acidic olive oils of the area and can pair with fish as well as the heavier gamey meats of the area.
Download PDF Fact Sheet

This wine has the remarkable ability to seem incredibly pungent on the nose, coat the inside of the glass like cough syrup, and yet deliver a light bodied, low alcohol wine with acidity built for the Istrski pršut (Istrian Prosciutto) that happens to hang from the ceiling of the winery. Primary and malolactic fermentation are completed with native yeasts. While Refošk is in the Refosco family, it differs in that it ripens later and often has more pronounced ripe fruit. Historically, Refošk was given to woman after childbirth to combat anemia due to the rich iron content. A great pairing with charcuterie, oily cured fish, fish stews, and blood sausage. Locals make “Istarska supa,” a slightly warmed broth of wine, toasted country bread, olive oil, sugar, and a healthy dose of black pepper.
Download PDF Fact Sheet

This wine has the remarkable ability to be incredibly fragrant and coat the inside of the glass like syrup, while still being a light bodied, low alcohol wine with acidity built for the Istrski pršut (Istrian Prosciutto) that hangs from the ceiling of the winery. Primary and malolactic fermentation are completely with native yeasts. While Teran is in the Refosco (& Refošk) family, it differs in that it has slightly higher acidity and pronounced iron and sanguine flavors. Historically, Teran was given to woman after childbirth to combat anemia due to the rich iron content. A great pairing with charcuterie, oily cured fish, fish stews, and blood sausage. Locals make “Istarska supa,” a slightly warmed broth of Teran, toasted country bread, olive oil, sugar, and black pepper.
Download PDF Fact Sheet