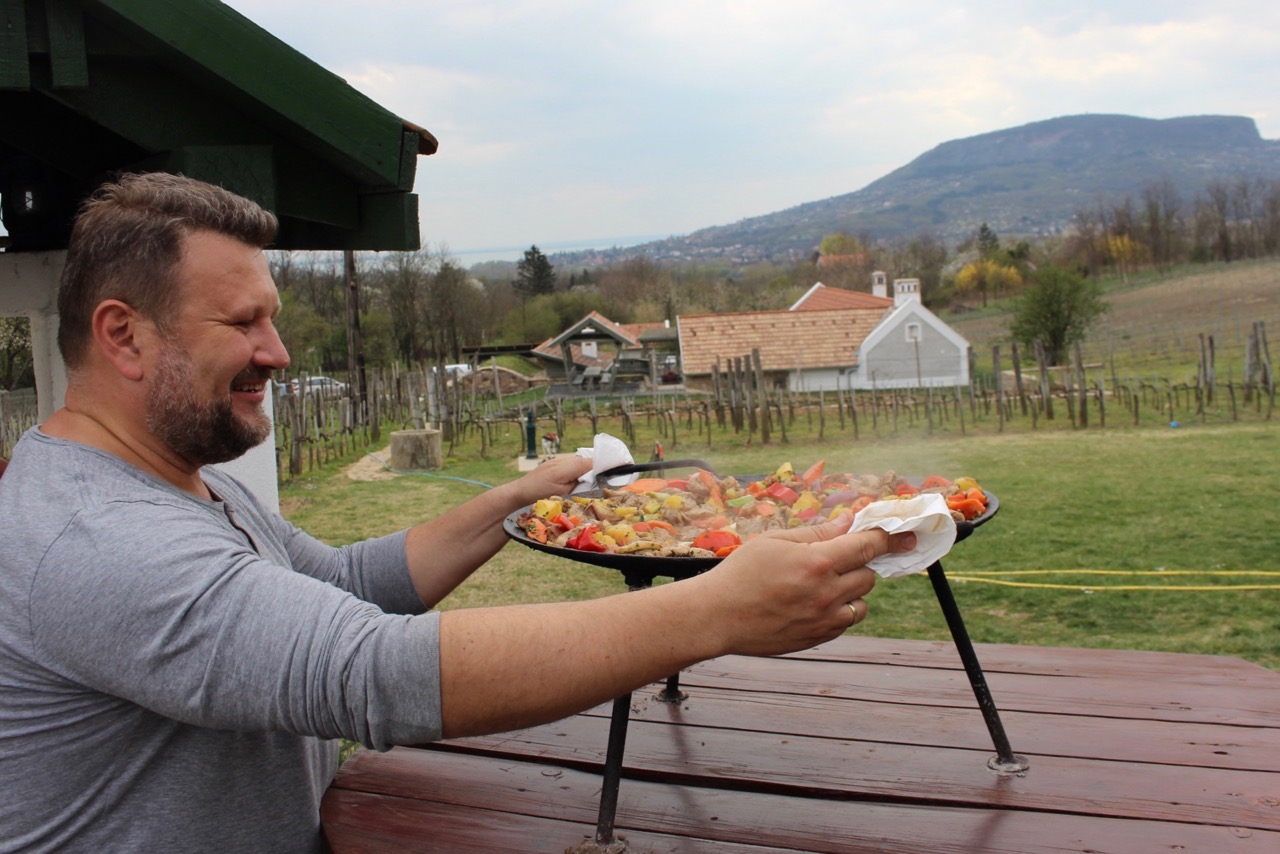 Along the northern shore of Lake Balaton, and nestled in a valley in between the basalt cones of Örsi, Gulácsi, and Tóti we find the wine and food world of Péter Váli. I’m convinced that Péter runs on a small fusion reactor. As we race through the cellar and open countless bottles, he’s also playing with his 4 children, bringing out platters of his wife’s cheese, brother’s deer sausage, his own homemade cured meats, and then cooks from scratch a stand alone amazing meal over an open fire. He doesn’t appear to break a sweat or show any signs of distraction. His wines show an equal measure of focus and joy. He dreamed of being a chef since he was 10. As a teenager in the mid 1980s during Communism, he was able to attend the Gundel Károly Catering School and tasted French and Italian wine and cheese for the first time. He then decided that in addition to being a chef, we would also make his own wine. Founded in 2000, he more than achieved both goals. 4.5 of his 9 hectares surround his home along with herb/vegetable gardens, a typical buried cellar, and endless ovens and fire pits strewn about. Although only an hour away from Somló, the effect of the lake brings wind, protects against frost, and allows for more ripeness. The acids here are intense, but rounded out with aromatics, fruit and salt. You need wines like this in order to survive the over the top hospitality of this man.

Along the western end of the north shore of Lake Balaton, Badacsonyörs is one of the smallest villages in the Badacsony region. It’s about 2 kilometers from the center of Káli Basin and 2 kilometers from the village of Badacsonytom – a good balance between the lake and inland volcanic valleys. The vineyards are south facing, on average 150 meters high, and the soils are predominantly Pannonian sand with high sediment content, volcanic lava stones (mostly basalt) and then covered with thick brown forest soil. All sites are farmed organically with natural cover crops, light tilling when needed, and worked by hand. 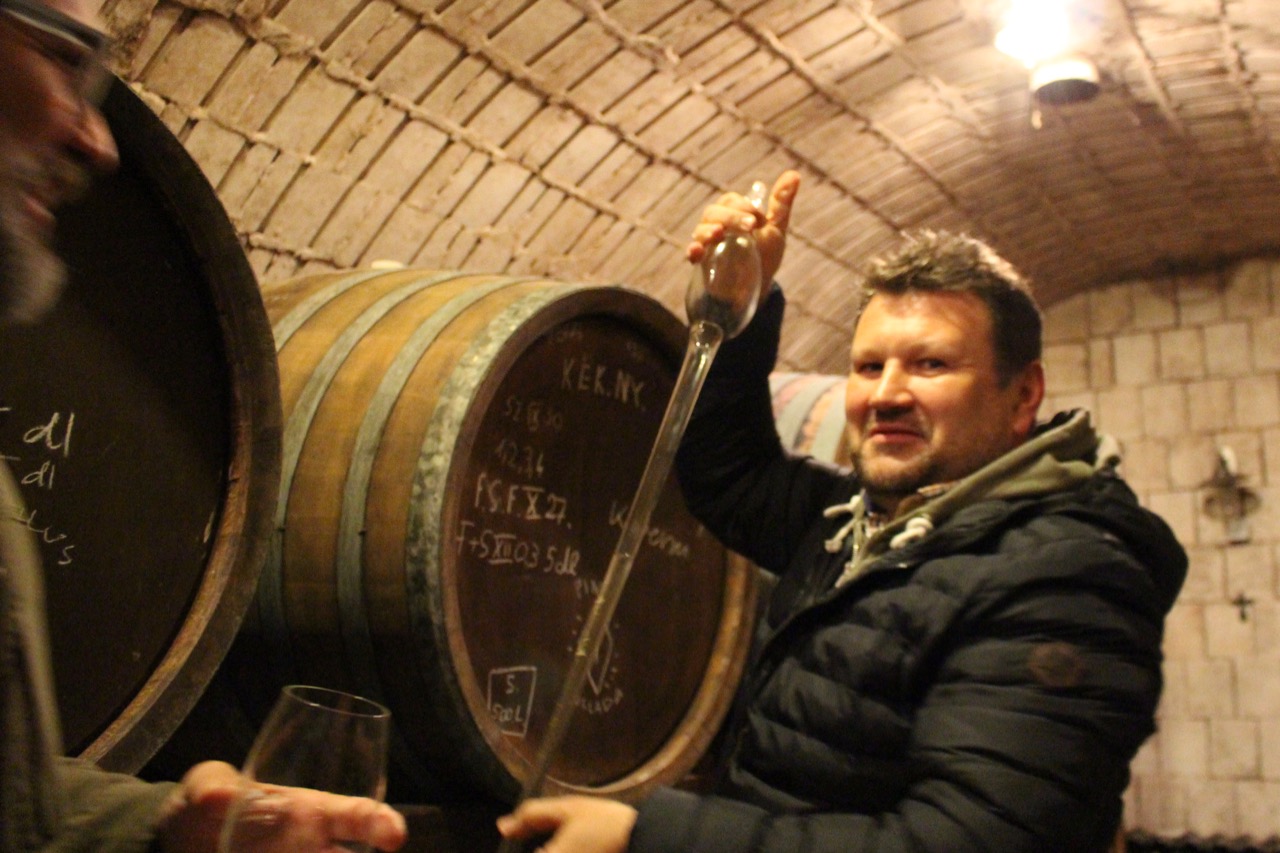 In the cellar with Péter Váli

The most important thing to know is that Péter almost always blends reductive tank and barrel fermented wines from the same grape and harvest. Depending on what the vintage allows, all his whites spend 6-48 hours on the skins. He likes the texture, structure, and given his relatively cold cellar, helps promote a strong native fermentation. No additions are made other than a little SO2 at bottling. 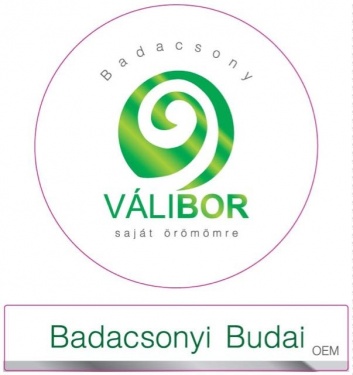 Literally, the “Green of Buda,” was once a very highly regarded grape along the banks of the Danube near Budapest pre phylloxera. Nowadays there are less than 7 hectares in Hungary (!), and most are found on the southern slopes in Badacsony. Historically it was planted with Kéknyelű to help pollinate and was blended in with the final wine. Péter chooses to make it on its own. Super high in acid, good weight despite almost zero maceration, and one of the only wines made 100% reductively in tank.
Download PDF Fact Sheet 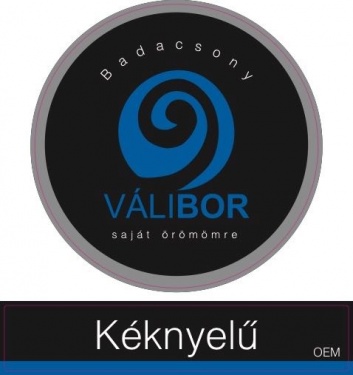 There are only about 41 hectares total of this grape in the world, and it’s all right here in Badacsony. After limited yield considerably, it’s fermented in both tank and Hungarian oak for 8 months. The grape has small berries with thick skins, is semi aromatic, and according to Péter, “tastes like frosted basalt rocks.” Typically it needs time in the bottle to come around, so we’ve been holding this back as long as possible. A very special, rare, and ageable white from Lake Balaton.
Download PDF Fact Sheet