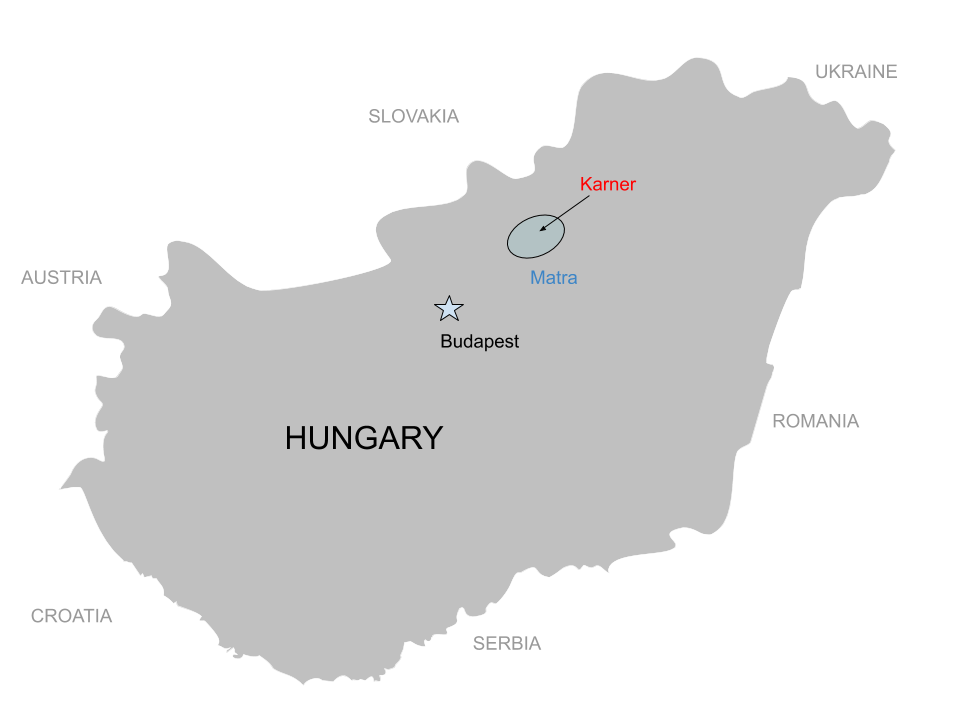 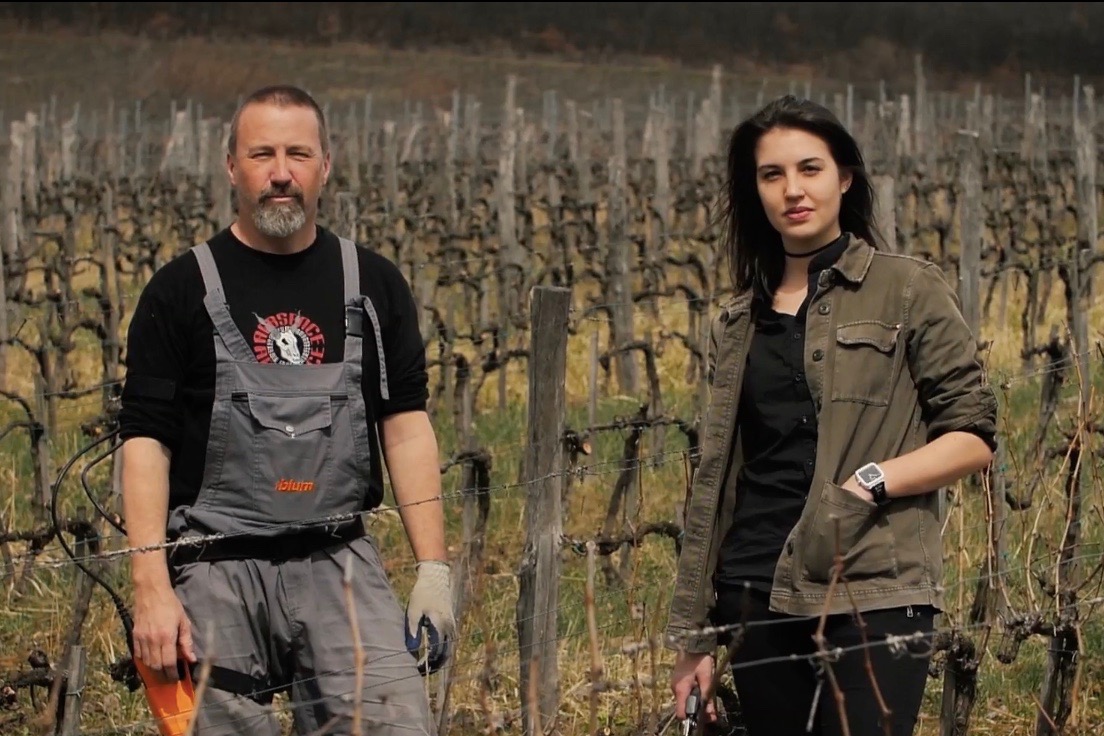 Father and daughter Gábor and Fanni Karner in the vineyard

The Mátra appellation is something we often zoomed past without much thought on our way to Eger and Tokaj in the Northeastern part of Hungary. Perhaps it was because the freeway largely bypasses the towns or because many of the supermarket wines seemed to come from these hills. Below the country’s highest mountain of Kékestető, this is the second largest wine region with 7574 hectares. In recent times, it has largely been dominated by just a few larger industrial players leftover from the Communist COOP years. Think wide row spacing for Soviet tractors, high yielding low quality grapes and industrial farming. For a small group of winemakers, the pendulum is swinging the other way. At the same time, this region has plenty of history that predates Communism. 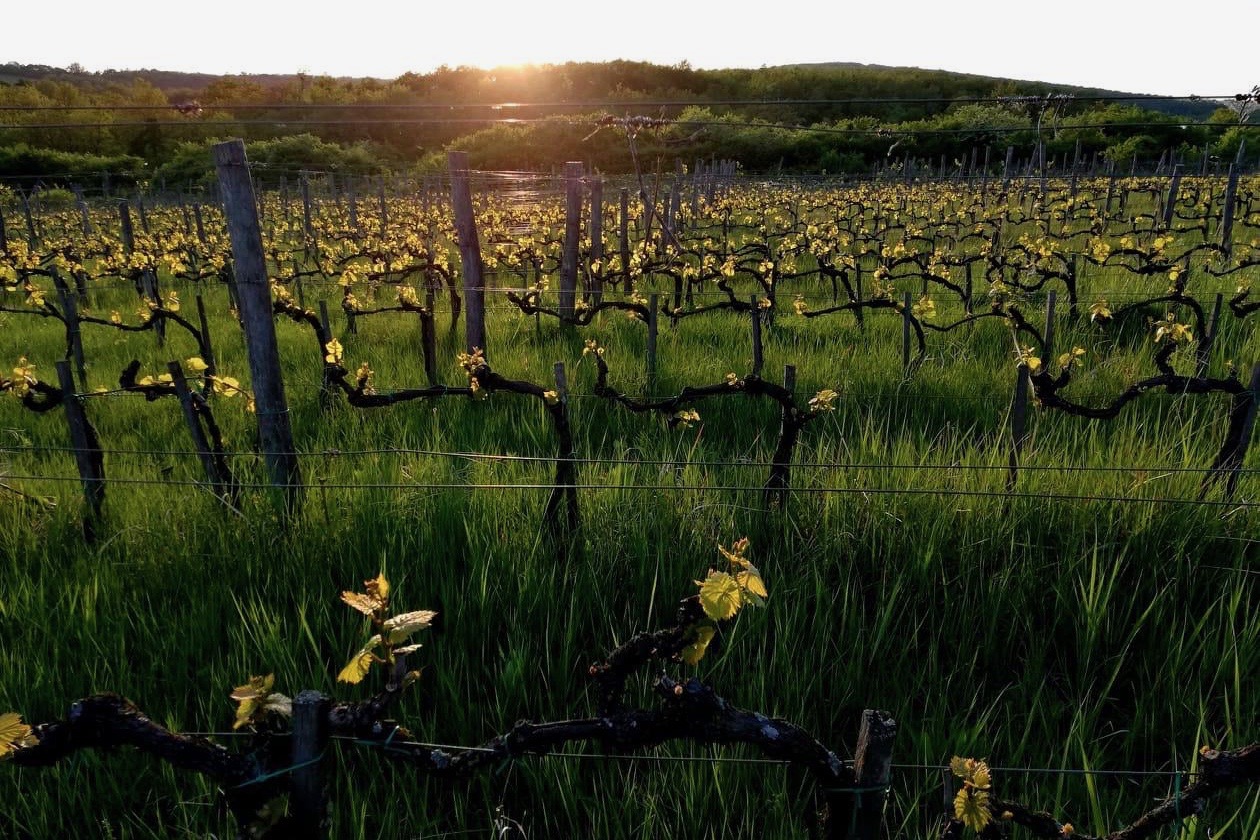 Spring in the vineyard

Vineyards began with the Celts as early as 1042, and the village of Gyöngyös has written records from 1334 licensing a freedom to produce commercially. By the 15th Century these wines were trading well and being heavily taxed during the Turkish occupation. During Rákóczi's War of Independence against the Habsburgs in the early 1700s (spoiler alert, they lost) the wineries of Mátra were punished with Serfdom. Then came Phylloxera, the World Wars, and the aforementioned Communist COOP era. 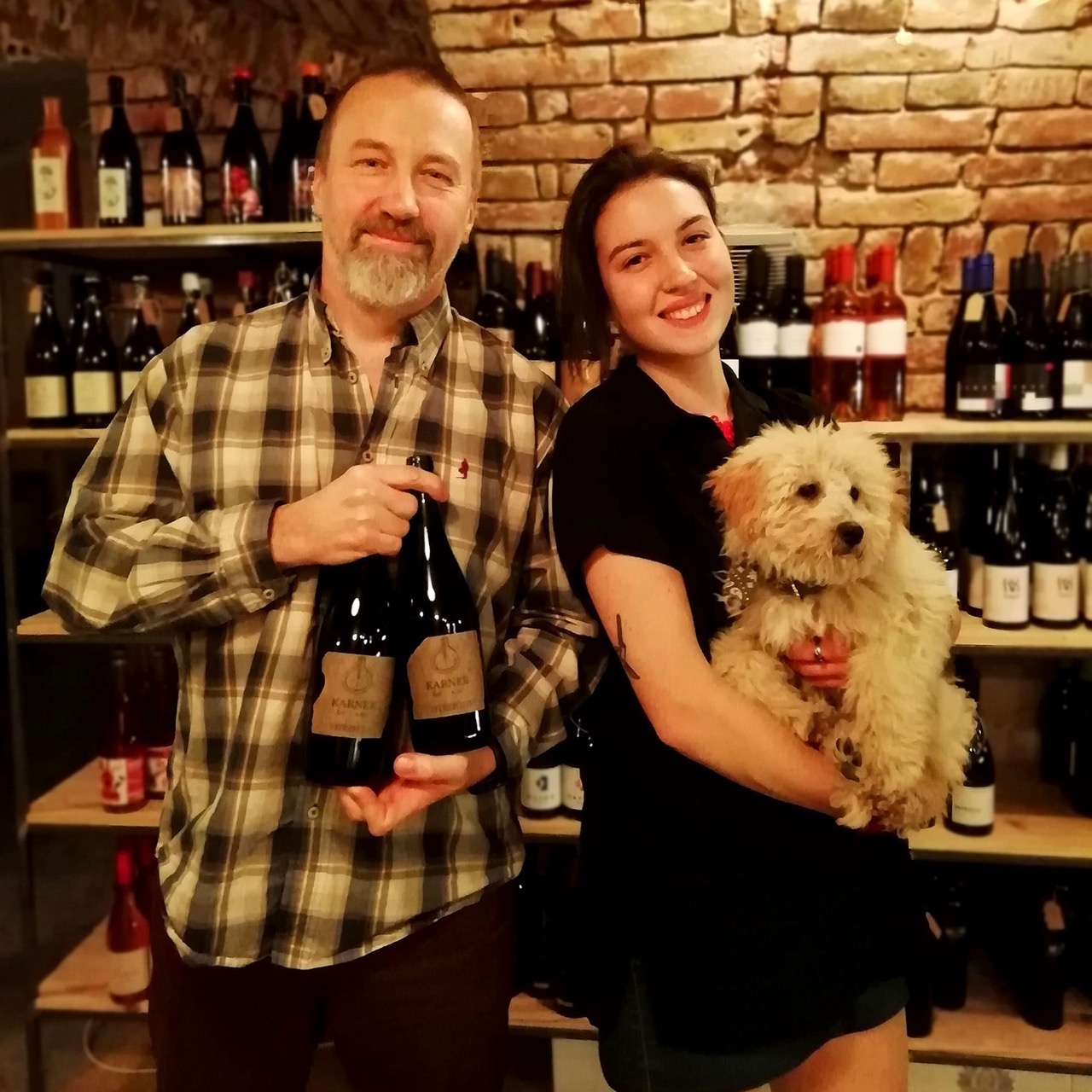 That brings us to today. What made this area attractive for industrial farming also makes it attractive for organic and regenerative farming. There is low disease pressure, volcanic soils, and protection from extreme weather. Founded in 2000, Gábor Karner now has 5.5 hectares and along with his daughter Fanni, run the estate in the nearby village of Szűcsi. Gábor is also a founding member of Tőkések Mátra (Handcraft Winemaking Circle of Mátra) along with Bálint Losonci and Tamás Szecskő who live a few miles down the road in Gyöngyöspata. They devoted themselves to organic farming, low yields, spontaneous fermentations and no additions other than SO2. As of the 2017 vintage, Gábor and Fanni do not add any additives of any kind. Along with the rhythm of growing and making wine, he’s also a long time drummer most notably of the band rock Æbsence. Drumming makes him happy. When you taste with him he’s constantly tapping the table and moving his feet. It’s also clear that having his daughter choose to work with him brings him even more happiness. 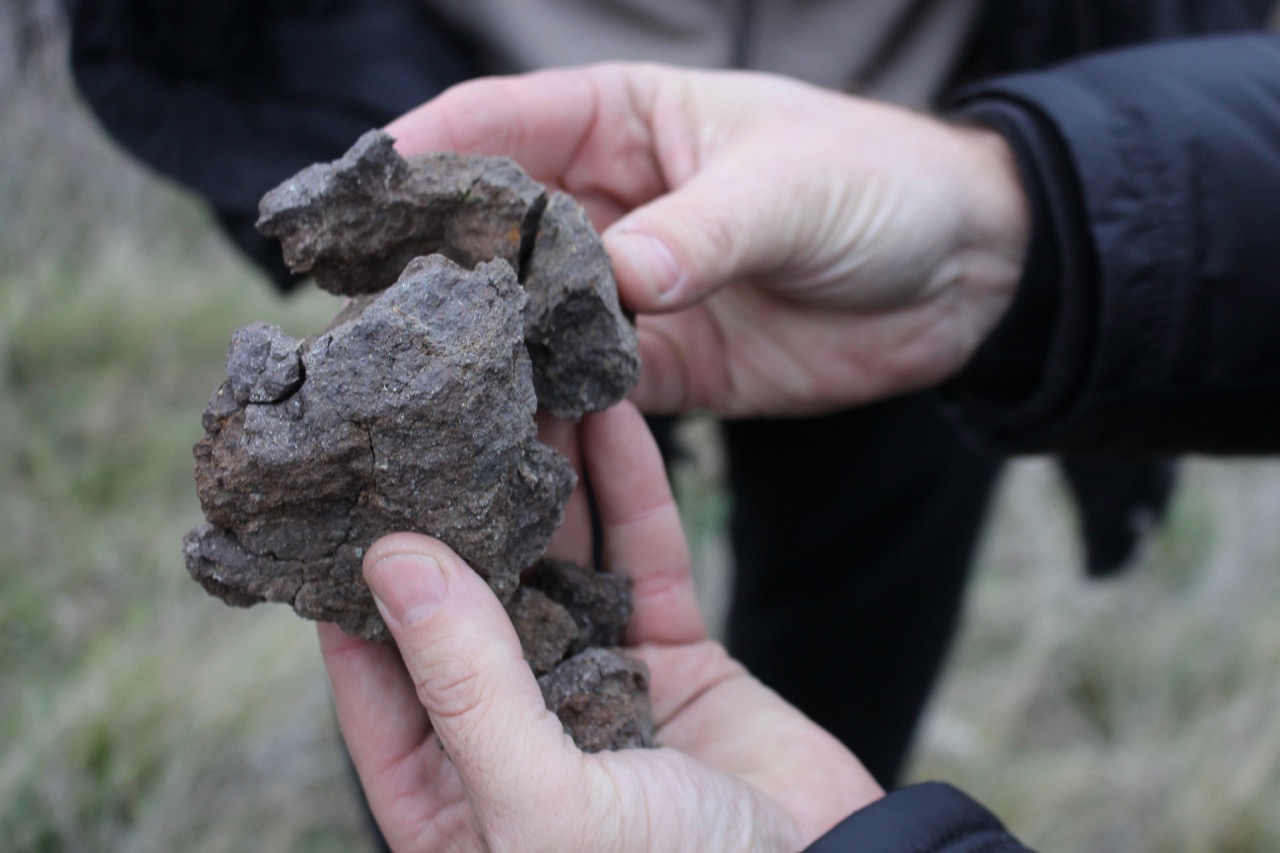 Karner's vineyards are located near the village of aforementioned village of Szűcsi. There are over 100 cellars built into the hillside in the Szücsi “Pincafalu” (cellar village), but maybe a dozen or so are still in use and mostly as hobby winemaking. The soils are a mixture of andesite, rhyolite tuff, hummus rich black loam and clay. Mount Kékestető blocks the cold winds from the north, there’s direct exposure to the south, and there’s great airflow year round. There are no absorbable chemicals, rarely tills, and sprays organic treatments 1-2 times per year at most. Sometimes there are zero sprays for the growing season. Most rainfall for the year comes in early summer and then it’s typically dry until harvest. He crops things back to around .5 kilo per vine. 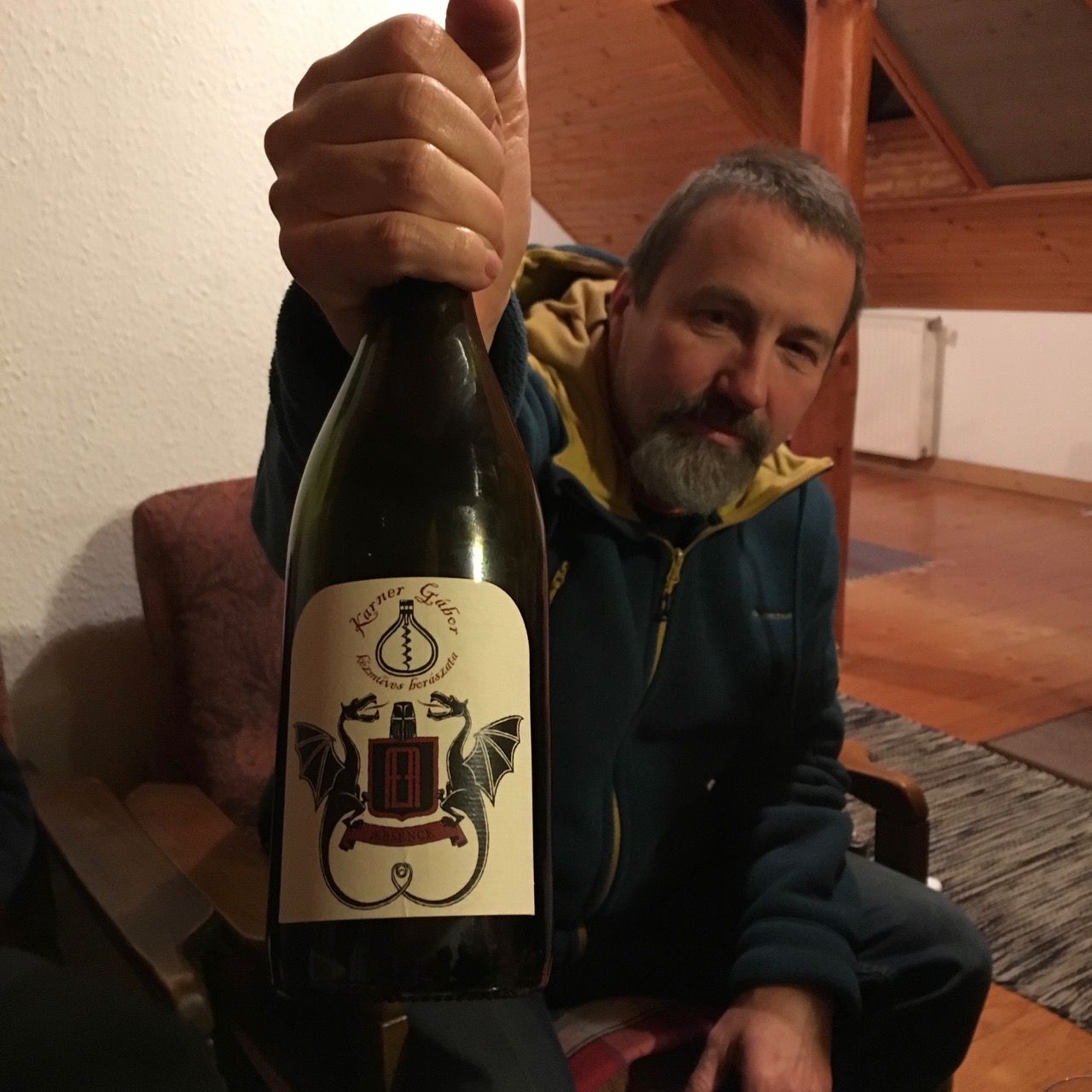 Gábor Karner at our first meeting 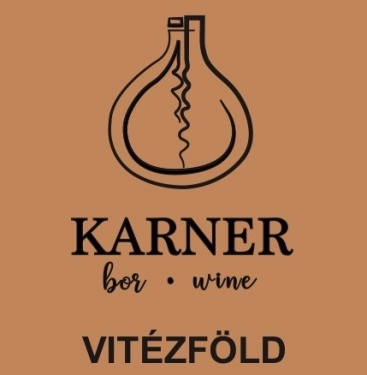 The vineyard name translates to “The good soldier’s land.” Gábor learned that the best plantings were located here pre Phylloxera. During a winter visit we ate frosted rose hips and felt the sun hitting us before the rest of the village below with Mount Kékestető in the background. Hand harvested, 1 week of maceration in tank, and then 1.5 years aging in tank. Unfined, unfiltered, and no additions of any kind. This is dark, layered, high acid and perhaps the most structured and tannic Kékfrankos in the portfolio.
Download PDF Fact Sheet