“Our practices are based on humility and lots of handwork. We strive to achieve natural simplicity and high quality in our restless pursuit to do better. Our days are filled with the joy of learning and the excitement of a challenge. It’s the perfect experience, to become one with the thing we do.”—Gyula Szabó, Winemaker 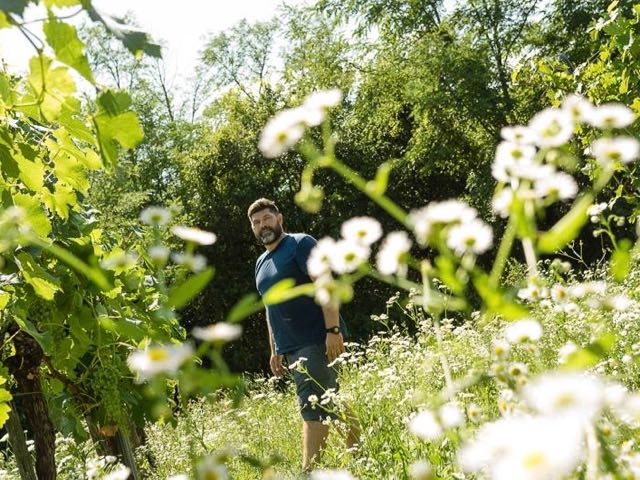 Gyula Szabó in the vineyard among cover crops

On our first exploration of the Northern shores of Lake Balaton, locally known as the “Hungarian Sea,” we started on the Western end in the Badacsony region. Zigzagging from basalt columned witness peaks like Szent György-hegy (Gilvesy), back down closer to the water in Badacsonyörs (Csendes Dűlő), and then back up east into the uplands towards the village of Köveskál. 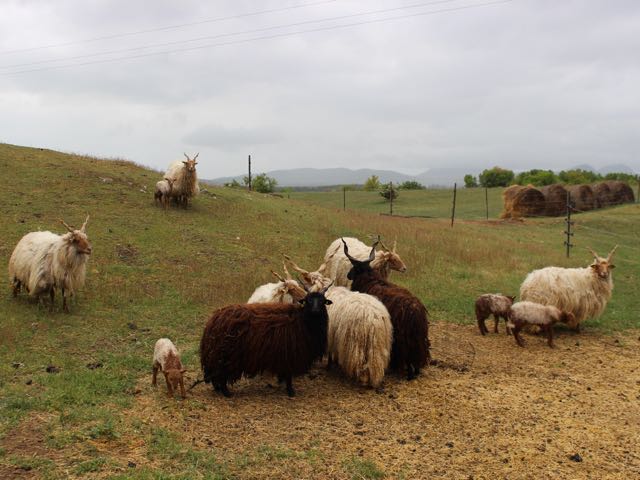 The village of Köveskál sits more or less at the center of the Káli Basin surrounded by Basalt buttes, thick forests (Linden, Oak, Sumac), and rich rolling farmland littered with spiral-shaped horned Racka sheep, wooly Magalica pigs, and iconic Grey Cattle. There is a palpable and vibrant biodiversity here. 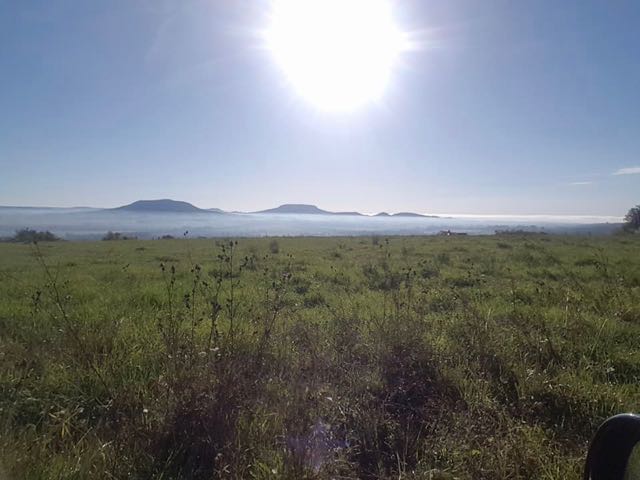 Starting in 2006, Gyula Szabó decided to continue what his grandparents and father did in the same family house but instead take it commercial starting in 2009 with just 1.5 hectares. At first glance, Gyula is an imposing figure somewhere between a rugby player and barbarian warrior. His handshake did not disappoint and he immediately proved to be an incredibly warm, funny and thoughtful man. With Iron Maiden playing in the background he also let us know that he learned English mostly from watching ‘Beavis and Butthead’ and ‘South Park.’ Immediate approval. He was also keen to inform us that the Mediterranean like influences from the lake coupled with volcanic tuff soils riddled with basalt fragments, rich clay and dense brown soils have been yielding high quality wines here since the Romans. Focusing on Olaszrizling, the Káli-Kövek wines are among the most densely, bright, aromatic and mineral we’ve found in the Uplands of Lake Balaton. 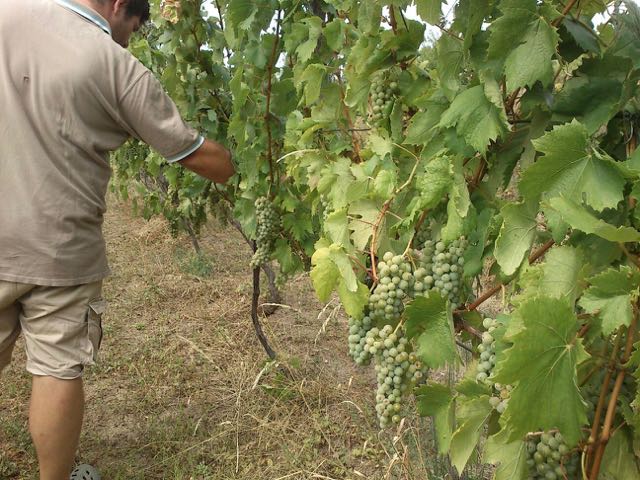 Gyula Szabó looking at the grapes

The Káli Basin is the result of the Pannonian sea slowly receding about 4 million years ago. Thick layers of marine sediment were then covered with volcanic activity most strikingly by the basalt lava columns that define the skyline. There is also dolomite limestone, brown forest loam, red sandstone and clay that fill in around the basalt. All of Gyula’s vineyards are farmed without pesticides or herbicides and SO2 is sprayed by hand when needed. The proximity to the 50 mile long lake does increase the humidity, but it’s more a buffer against extreme weather more than a major risk of mold or frost (even in 2016). The Köveskál Olaszrizling is grown in the 45 year old Töltés Dűlő (vineyard) on Fekete-hegy (hill). The soil is mostly volcanic tuff with basalt fragments and the vines are mid-wire Cordon trained. The Rezeda Olaszrizling on the other hand is a blend of 4 sites including Fekete-hegy, Hegyestű, Tagyon-hegy and Szent György-hegy with an emphasis on basalt and clay. Vine age ranges from 20-45 years old. 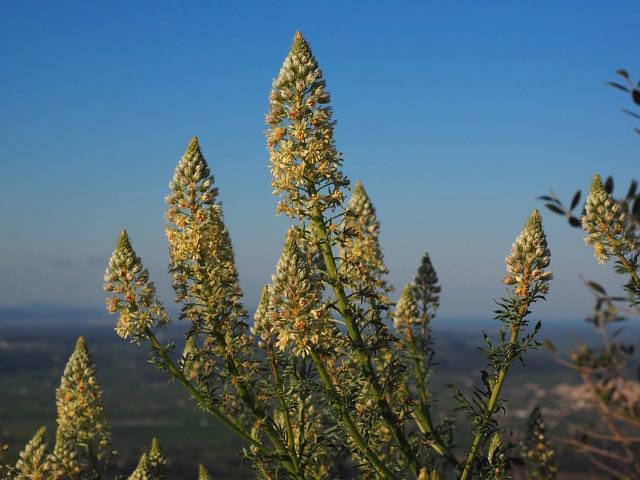 All wines are hand harvested and hand sorted. Using a well conditioned 40 year old press, the mostly free run juice is fermented in used 500L and 225L Hungarian Zemplén Oak barrels. There is little to no press fraction that goes into these wines. Fermentation is always spontaneous for both primary and secondary. Wines then age between 6-9 months before bottling. Since the Rezeda comes from four sites, harvesting occurs between mid September and mid October and are then blended together.

This comes from an intensely basalt ridden area in Hegyestű – formally a large basalt mine. Only a few kilometers from the lake, this hill looks just like Devils Postpile. More importantly, it looks like Somló, Juhfark ground zero in Hungary. The Pangyér dűlő is nearby is clearly inundated with volcanic basalt soils. Using just free run, this 2017 was fermented in oak with native yeasts and then aged 16 months in 400L Hungarian Oak. Fruit, funk, acid, smoke and salt in a much lighter style than classic Somlói Juhfark.
Download PDF Fact Sheet

Rezeda is the Hungarian word for the perfumed Mignonette flower that grows all over the Káli Basin alongside the famous lavender of the area. Romans used it as a sedative to treat injury, the Greeks considered it ambrosial, and Gyula considers it one of the best things to find in Olaszrizling. Not surprisingly, this is the most floral wine of the estate. The grapes also come from four sites defined by basalt and the resulting saltiness on the palate is the perfect foil to balance said aromatics. For those looking for something aromatic, weighty without new oak, and brimming with volcanic acidity, please give this wine some consideration.
Download PDF Fact Sheet 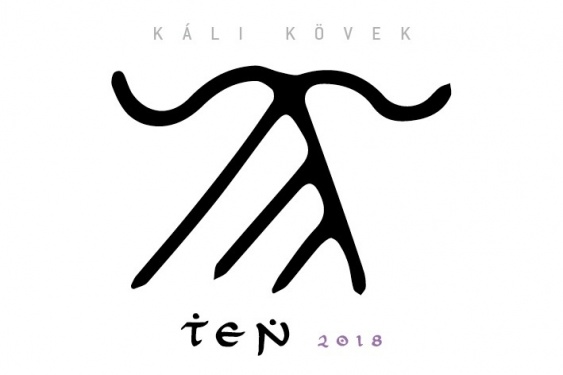 This wine marks the 10th anniversary for Gyula. This is a kitchen sink blend of all his favorite things. Organically grown Olaszrizling and Furmint from the Fekete-Hegy in Lake Balaton and Hárslevelű and Juhfark from Somló. All of the vineyards are riddled with basalt crumble soils and were botrytis free in 2018 at picking time. The whole blend is pure free run fermented in barrel and then aged for 7 months all together. Very much in the high toned, salty, and low alcohol vein typical for Káli-Kövek, the aromatics and texture from the thick skinned Somló grapes are present. A unique one-off to be sure.
Download PDF Fact Sheet