“Preserving nature and utilizing the vitality of the soil” is Ilse Maier’s motto at Geyerhof. There is a venerable history of making wine at Geyerhof but for many years now, the family has been managing vineyards organically, focusing on a sound eco-system and healthy soils. 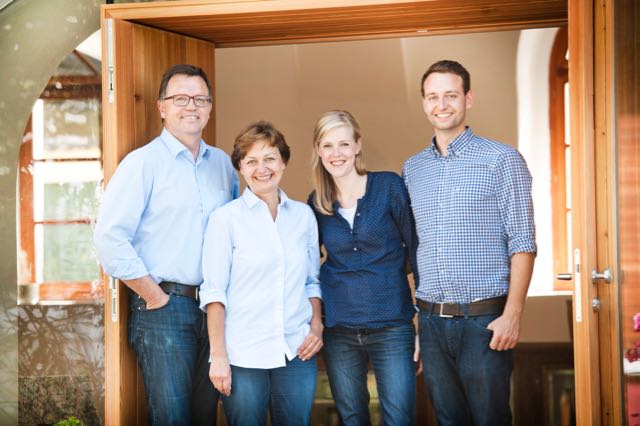 400 Years in wine. Ilse Maier’s mother’s family has lived in the hilltop village of Oberfucha since the 16th century where the family began in agriculture and brickworks. In the 17th century, Maria Theresia, archduchess of Austria, granted the property owner, whose name was Geyer, a concession to transport wine on the Danube in trade with Hungary and other regions along the river. The ship on the wine label refers to this trade. 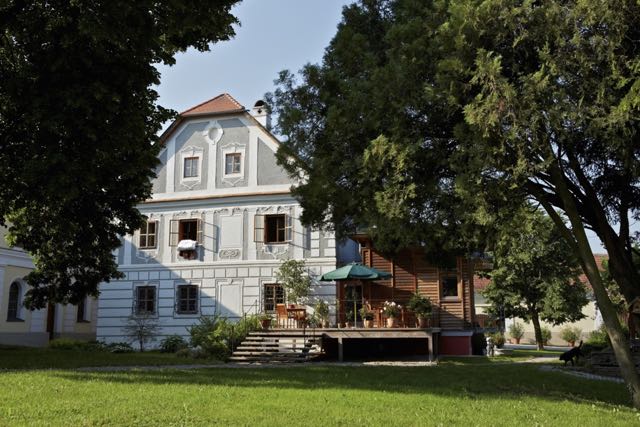 Today, the winery is housed in a 16th-century structure built of brick, with cellars beneath it constructed between the early 1300’s and the late 1700’s. Among these, the “French cellar” where Napoleon’s army stored their wine rations during a battle in nearby Wagram. 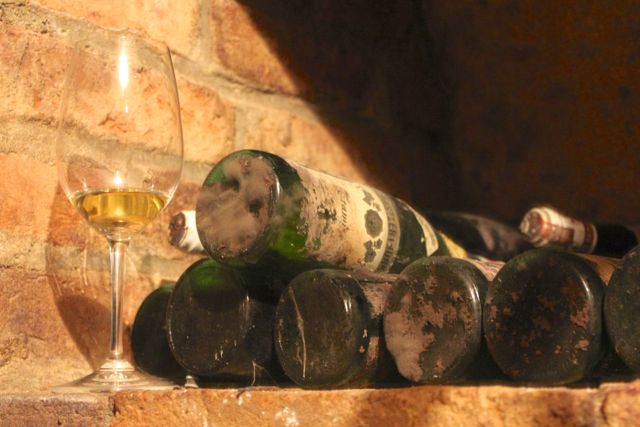 Old bottles in the cellar

The room’s perfect temperature and humidity make it an ideal place to archive the best of each vintage. In 1986, after studying agriculture in Vienna and spending time in San Rapael, Argentina, Ilse joined her father in wine production. Today she works in the vineyards and the cellar, aided by her son Josef to produce wines reflective of their site. 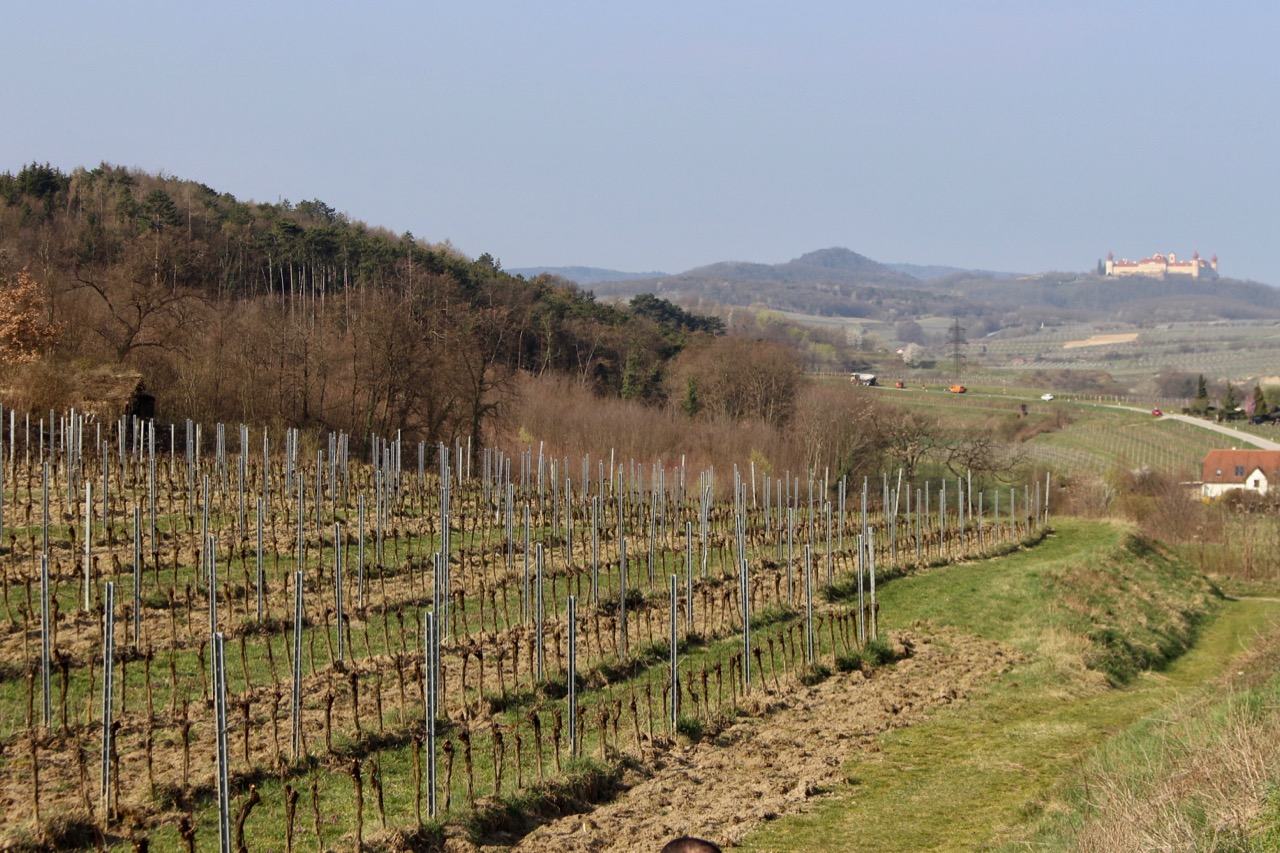 Geyerhof organically farms roughly 20 hectares located on the hillsides around the winery. Promotion of beneficial species, sowing of nitrogen-absorbing plants, use of compost and rock flour for plant nutrition, and abstaining from the use of all pesticides, insecticides, botrytis and weed control substances as well as soluble mineral fertilizer are all standard practices.

Loess and alluvial soil east of the winery (Gaisberg and Rosensteig), primary rock to the northwest (Steinleithn and Kirchensteig), and loamy soil to the south (Hoher Rain). 60% of the vineyard area is planted to Grüner Veltliner, 20% to Riesling, and the balance to Zweigelt, Weissburgunder, Chardonnay, and Gelber Muskateller. Recent clonal selections came from the famous Knoll vineyards. Asked if biodynamic viticulture has ever seemed to be a next step, Ilse says she doesn’t believe it to be necessary—bio is not a “step up” from organic, just a different approach. 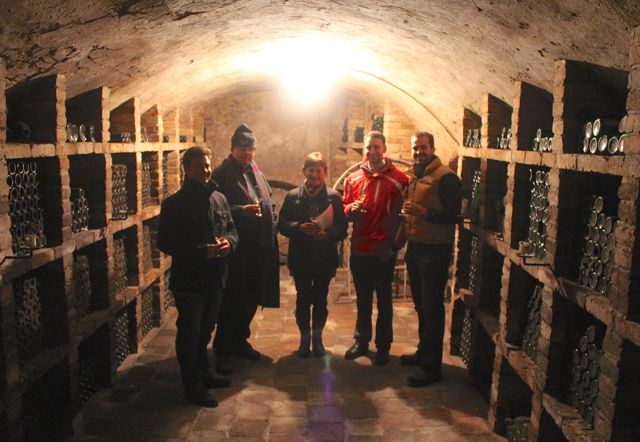 In the old cellar with Ilse

Fruit is handpicked and strictly sorted in the vineyard. Healthy clusters are pressed whole, and the must is intentionally oxidized in the press tray resulting in deeper flavors and greater age-ability. Wines are fermented and aged in 3,000 liter temperature controlled stainless steel tanks. 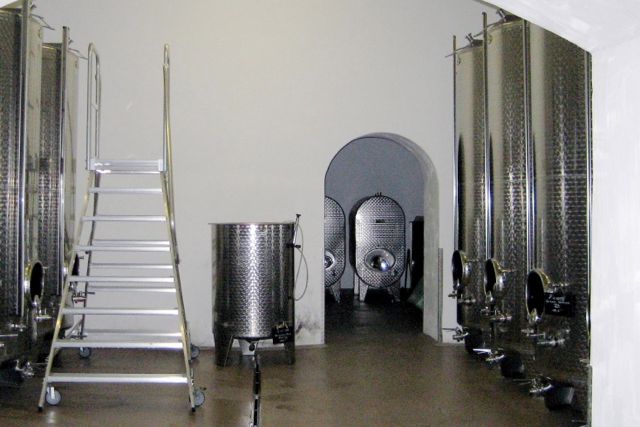 The slow, even fermentation never exceeds 22 °C. A small percentage of whites and the red wine are aged in neutral oak tanks or barrels. Spontaneous fermentation is preferred, but never at the expense of quality. Malolactic fermentation is avoided in the whites. No other additions are used except for sulfur before bottling. Wines remain on the lees until just before settling, gentle filtration and bottling. 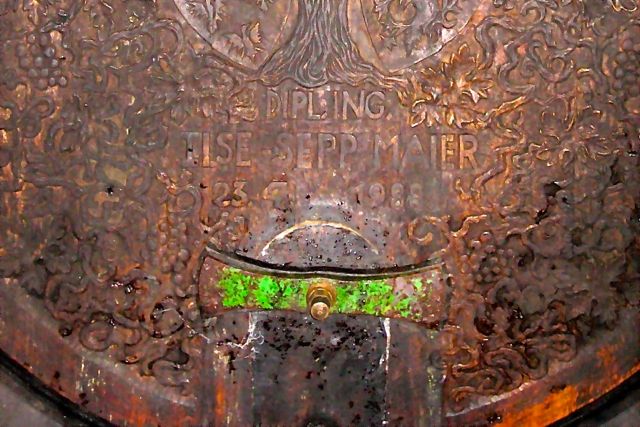 This has been a staple for us since we began working with Geyerhof. From the vineyard, you can look up at the Stift Göttweig Abbey and down at the Danube River. To your back is buffer of forest. The Danube gives the wind to lessen the disease pressure, the forest buffer keeps it cool for acidity, and the exposure is more than enough for ripeness. The soil is a mixture of gravel and sand. Grapes are hand picked, whole cluster pressed, then aged on the less until February. More the stony and citrus side of Grüner rather than the grassy and Sauvignon Blanc end of the spectrum.
Download PDF Fact Sheet

The StockWerk wines pull from the younger vineyards in and around the village of Oberfucha and are usually from granite and gravel soils. These are also the cooler sites buffered by forests, grazing land for their cattle, and North-East facing. These are very much Heuriger/Buschenschank wines to us, in that they are made to have fresh with plenty of accordion and comfort foods. They are bright, happy, lower alcohol, and table wines in the best possible sense.
Download PDF Fact Sheet

This vineyard is the first impression you get when pulling up to the property. The soil is mostly granite which you can see flicker in the light and results in wines with lower alcohol and a kiss of residual Sugar to balance out the intense acidity. The Kirchensteig was a part of the first 2010 Erste Lage (Frist Growth) classification where for nearly twenty years, the Association of Austrian Traditionsweingüter has been classifying the very best vineyards in Austria. Hand picked, slowly pressed whole bunches, fermented in stainless steel and aged for 2 years on the lees. Still structured and just under 13% alcohol and the nearly 7 g/l RS adds creaminess and balance rather than sweetness.
Download PDF Fact Sheet

The StockWerk wines pull from the younger vineyards in and around the village of Oberfucha and are usually from granite and gravel soils. These are also the cooler sites buffered by forests, grazing land for their cattle, and north-east facing. These are very much Heuriger/Buschenschank wines to us, in that they are made to have fresh with plenty of accordion and comfort foods. They are bright, happy, lower alcohol, and table wines in the best possible sense.
Download PDF Fact Sheet